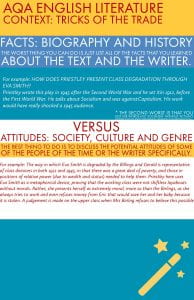 Teaching context can be a right regular pain in the arse.

We, as English teachers, have to do it, but I’m sure it’s something we all do with caution, knowing that there’s every chance we’ll get back essays that (for some unknown reason) start with a biography of the writer and a summary of the era: Shakespearean Times.

Otherwise known as the Tudor or Jacobean period.

Why is it that our students love to throw in every historical fact they’ve ever read or generalise about everyone who was alive at the time.

Have you heard about the misogyny of all Elizabethans? All of them. Every. Single. One.

This got me thinking about how we move students on, from commenting on biography and facts, to discussing attitudes, values, culture and genre instead.

The most important thing I wanted students to know was that listing all the information they know tends to get them nowhere.

For example: HOW DOES PRIESTLEY PRESENT CLASS DEGRADATION THROUGH EVA SMITH?
Priestley wrote this play in 1945 after the Second World War and he set it in 1912, before the First World War. He talks about Socialism and was against Capitalism. His work would have really shocked a 1945 audience.

Rather, I wanted them to try to discuss the potential attitudes of some of the people of the time or the writer specifically.

For example: The way in which Eva Smith is degraded by the Billings and Gerald is representative of class divisions in both 1912 and 1945, in that there was a great deal of poverty, and those in positions of relative power (due to wealth and status) needed to help them. Priestley here uses Eva Smith as a metaphorical device, proving that the working class were not shiftless layabouts without morals. Rather, she presents herself as extremely moral, more so than the Birlings, as she always tries to work and even refuses money from Eric that would save her and her baby because it is stolen. A judgement is made on the upper class when Mrs Birling refuses to believe this possible!

This is not a quick fix or one simple solution.

What step forward have I made though? I’ve got it clear in my head what I do and don’t want from them. I can tell them clearly and I can show them clearly.

How do you teach context to your classes? What advice should I add into this blog post?